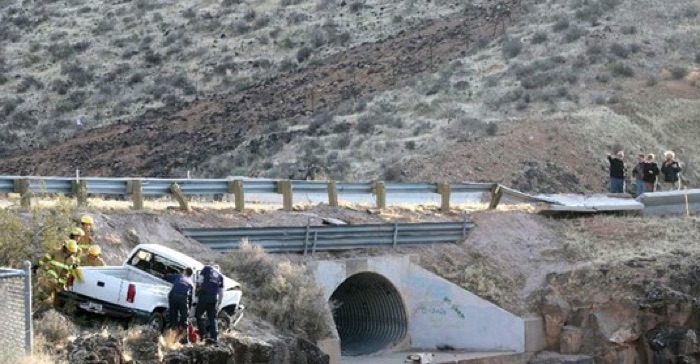 LOOK CLOSELY AT THE FIRST PHOTO BEFORE YOU CONTINUE…

And be sure to read the story below before going to the 3rd photo.

Look at the picture above and you can see where this driver broke through the guardrail, on the right side of the culvert, where the people are standing on the road, pointing. That is the point where the pickup truck went off the road as he was traveling at 83 mph (from right to left) when it crashed through.

The truck then flipped end-over-end, bounced off and across the culvert outlet, and landed on the left side of the culvert, facing the opposite direction from which the driver was traveling. The 22-year-old driver and his 18-year-old passenger were unhurt except for minor cuts and bruises. The accident occurred on State Route 59 near the city of Hurricane, Utah.

If that was the end of the story, many would claim this is truly a miracle.

…then take a look at the final picture below The truck somehow landed upright on a narrow, unpaved area, approximately one foot from the edge of the deep ravine!

A police spokesperson described the incident and its miraculous outcome as “amazing.”